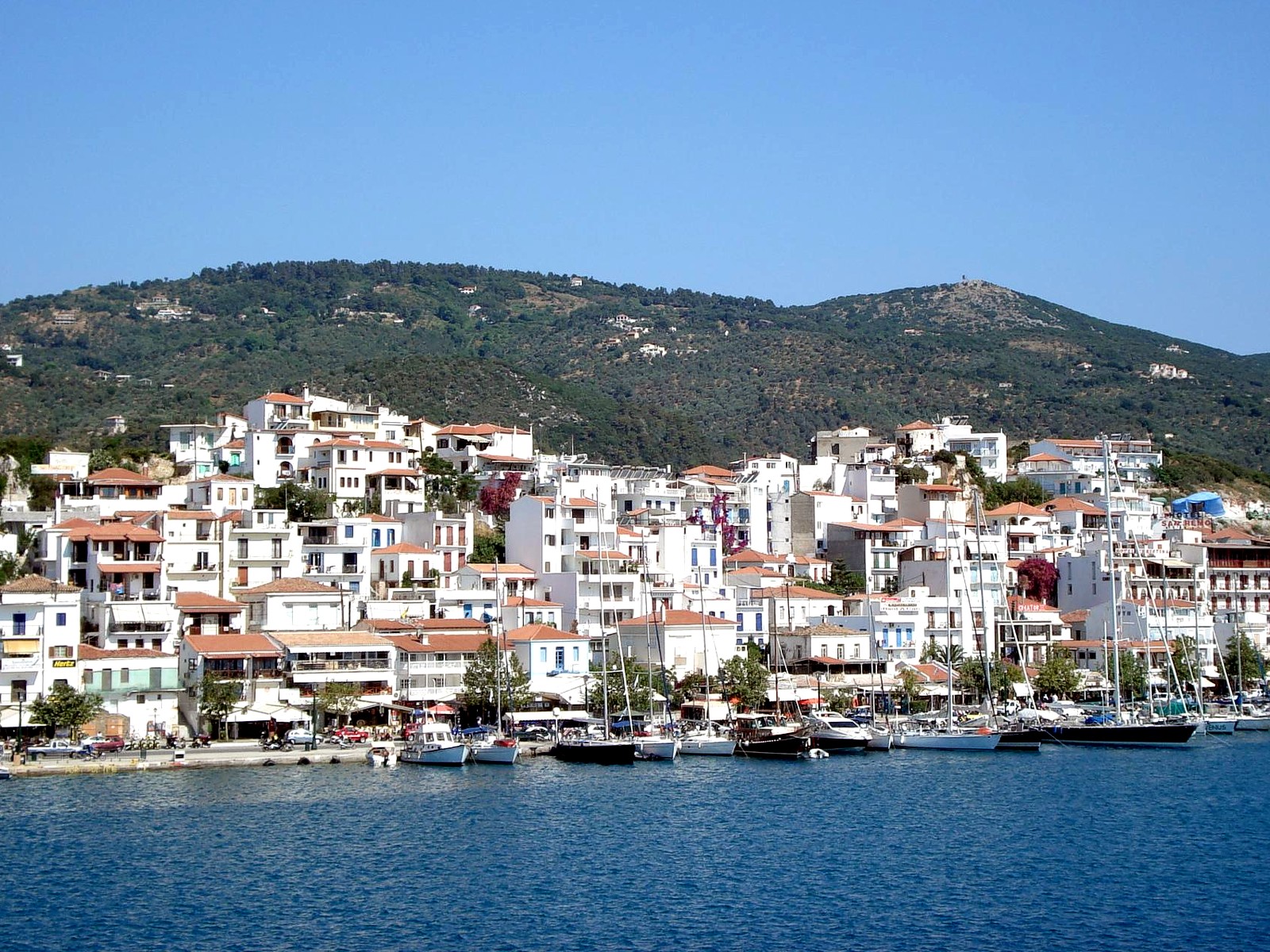 According to what is written in “Periigisin” the island in prehistoric times inhabited by the Pelasgians, pre-Hellenic people who descended from Thrace. There Block but before installation of the Pelasgians in Skiathos, the island was inhabited by Kares who like Thucydides tells us, in many Greek islands in those old years came and settled.

But it is likely that the island was inhabited by other peoples after the installation of the Pelasgians. Probably if I had come to know that Cretans had occupied neighboring Peparithos (today Skopelos).

This hypothesis is supported by the fact that one of the sacred names of the god Dionysus, who was worshiped on islands occupied by Cretans was “Skianthios” adjective that resembles the name of the island.

But it is likely that the island was inhabited by other peoples after the installation of the Pelasgians. Probably if I had come to know that Cretans had occupied neighboring Peparithos (today Skopelos).

This hypothesis is supported by the fact that one of the sacred names of the god Dionysus, who was worshiped on islands occupied by Cretans was “Skianthios” adjective that resembles the name of the island.

After these ancient inhabitants, Skiathos inhabited Chalcedeans. The Chalcedeans were Ionians who came to Skiathos during the period of their colonizing activities from the The century onwards. They seem to have arrived on the island in the seventh or sixth century in one of the marches them to establish colonies in Chalkidiki.

They built their city in the southeast of the port on the hill that dominates in the large bay and the inner double harbor. The city was encircled by a wall of square marble blocks, large and rough and was connected to the mainland and the port with two gates.

This town survived all through the Classical, Hellenistic and Byzantine periods until the time when the medieval city, the castle, in the northern part of the island. Skiathos reappears on the historical scene during the Persian Wars as Herodotus tells us, in 480 BC, when the Persian fleet was sailing down from Thessaloniki, the Greeks awaiting it at Artemision in Euboea, were warned by lighted torches on Skiathos.

It seems that this period Skiathos helped the Greeks and was perhaps one of the few cities which did not “emidisan”. When eg 478/7 A’Athinaiki the Alliance was formed, known as the Delian League, Skiathos followed the Athenians.

For payment of the tax, the Athenians separated the allied cities to regions and as seen from the “taxation lists” preserved in Attic inscriptions, Skiathos was included in the Thracian region or “from Thrace any tax” and paid a thousand drachmas a year, an amount very small, which indicates that Skiathos was poor in those years. During this period of the Athenian Alliance, Skiathos as the other cities, the alliance had autonomy and democratic management. He had namely parliament, ecclesia and eponymous archon. But as is known, finally, the alliance developed into an hegemony and domination of the Athenians against the allies.

By the end of the Peloponnesian War in 404 BC, the Athenian defeat and the victory of the Spartans, Skiathos came at the hands of Sparta and the regime became oligarchic. In 386 BC the Antalcidean Kingdom or peace, in which all the islands except Lemnos, Imbros and Skyros where the Athenians had sent colonists, gained their autonomy, declared and Skiathos officially independent. The Spartans, however, violated the peace treaty and soon seized Skiathos again, together with other islands, where a garrison and imposed heavy taxes.

The example 378/7 Athens established the Second Athenian alliance, a genuinely defensive alliance this time, with the aim of opposing the expansionist intentions of the Spartans, Skiathos tachtike again with her. At B this Athenian hegemony with democratic institutions and autonomy, Skiathos remained about 40 years. And it seems that this time the economic condition improved so much that in the middle of the fourth example century mint bronze coins with the head of Hermes on the one hand and the caduceus with the word CKIATHI other.

Later, the island was used by the Athenians as a naval port and a base for operations against Philip II of Macedonia. In 338 BC after the battle of Chaeronea, which effectively brought an end to the independence of the southern. Greece and the victory of the Macedonians, Skiathos came under their domination.

Macedonians established an oligarchic system of government in Skiathos and the island remained undisturbed for many years. Historically displayed again from the time of Philip V (238-279p.Ch.) Of the Macedonian king, who at that time was at war with the Romans. Skiathos those woes several years because of battle in the surrounding areas.

When starting the Second Macedonian war 200/199 eg Philip’s orders to destroy Skiathos and Skopelos so as not to fall into the hands of the enemy fleet and being used against him. And really the same year reached the island the Roman fleet and the fleet of Attalus I of Pergamon was an ally of Rome and plundered what was left of the devastation of Philip. Despite the extent of the destruction, the town quickly recovered and, following Philip’s defeat in Kynoskephalai in 197 BC restored democracy.

With the dissolution of the Macedonian state in 168 BC Romans ceded to the Greek city-states some freedoms. Finally, however in 146 BC entire Greece was subjugated by the Romans and Skiathos followed the same fate. In 42 BC after the battle of Philippi the victor, Antony, handed over Skiathos along with some other islands to the Athenians, as a token of gratitude for this friendly behavior.

Along with the Athenians again democratic polity Skiathos thus several years. The information we have on Skiathos from the first Byzantine period is minimal. We only know that administratively belonged to the province of Thessaly, which was part of the Macedonian issue and that the spread of Christianity on the island, created bishop seat belonged to the diocese of Larissa.

In 758 AD on Kon / mind Kopronymou at the port of Skiathos was the Byzantine fleet anchored who rushed to help Thessaloniki that was to attack the Bulgarians and Slavs. In VII AD century Skiathos suffered much from Saracen pirate raids in the Aegean. When the Byzantine Empire was overthrown by the Franks in 12O4 and the Aegean islands to the Venetians, Skiathos, Skopelos and islands of the Cyclades were occupied by brothers Andrea and Jeremia Ghisi, Venetian merchants.

The Ghisi government with several privileges set forth in the known “CARITULA SCIATI ET SCORULI” and apply the Second Venetian period, but abolished the Orthodox episcopate. For the housing and security of Skiathos town built a new castle in the Grand Harbour, called Bourtzi. The Ghisi brothers ruled the islands until 1259 and their successors for 17 more years, until 1276 when the Byzantine fleet drove from N. Sporades.

The island remained under the Byzantine Empire until 1453. The Byzantine rule but was rather nominal, as the pirate raids that plagued the Aegean at that time did not allow Kon / city to enforce effectively the islands had recaptured. So it seems that in the middle of the XIV century the islanders, desperate following the continous raids both the pirates and the Turks, leaving the coastal town and build new, safer Castle in the north of the island, on a steep rock constituted a natural fortress.

When in 1453 falls Kon / city to the Turks, the people of Skiathos chose Venetian rule, realizing that Venice from now on will be the only possible protection against the Turks. So they asked the Venetians to occupy the island but on condition to confirm the privileges that were given to the island Gizi and maintain the seat of the Orthodox Bishop, requests are accepted. So begins Venetian Skiathos which lasted until 1538. But the life of the people do not seem to improuve.

The pirate raids continued and Venetian rules were so harsh, that when in 1538 the castle was besieged by Barbarossa, found some that in order to escape from their tyranny, did not hesitate to deliver it.

The Turkish domination of Skiathos began in 1538 officially in 1540 with the signing of enetotourkikis peace. During this period the island was ruled by a Turkish governor the voivode, who was assisted by elders or notables, elected every year and was in the beginning one or two, then more. Skiathos as the other Aegean islands belonged to Kapoudan Pasha, that the Admiral of the Turkish fleet. Every year the residents were paying money as tax hike. There was also a Kadis for judicial affairs, Aga for administrative, zampitis for taxation.

The islanders like all islanders generally, were obliged to serve for some time in the Turkish fleet. Later mandatory This Term converted into a monetary contribution to “melachika”.

In pre-revolutionary years but came back signed. In mid Q. century, in 1660 the Venetian admiral Francesco Morosini occupied the castle and bring back a third time the Venetian domination which did not last long because the Turks retook soon and so continued their domination until the beginning of the Greek revolution. Over the years the Turks living in Skiathos ligostefsan. The office of voivode was bought by locals, the other not Turkish authorities more often than not were on the island and the services performed by the elders so that, little by little, gained more rights. The inhabitants, however continued to suffer from piracy did not stop them relentlessly.

In spite of the trials the islanders not thou hast forgotten shipping. From the beginning of the eighteenth century began to build small ships and carry on transportation and trade with the surrounding areas. Later on larger ships arrived in Egypt and the Black Sea. The feeling of freedom, however, stayed as6esto of the islanders. So in 1770 involved in the victorious Battle of Cesme on the side of the Russian admiral Alexios Orloff and later offer men and ships to the legendary Greek thalassomacho Lambros Katsoni that operated at that time against the Turkish raids into Turkish coast and attacks on Turkish ships.

An event of great importance for the Island and all Greece was the creation of the first Greek flag with a white cross on a blue background in September 1807 at the Monastery of the Annunciation.

Skiathos despite the fact that it was away from the business center and was easy prey for the Turkish fleet soon tachtike favor of the Greek revolution. At that time he had a sufficient number of equipped ships with trained crews from previous marine struggles of the chieftains of Olympus which until 1816 had taken place. So the islanders ships helped much the race.

At that time, they found refuge in Skiathos many refugees who were forced to flee their homelands when turned off rebel movements in these places. In counting the 30,000 refugees from the villages of Pelion, Olympus, Euboea, Epirus who sought refuge in B. Sporades. However, the concentration of so many people in such a small place created housing problems and food and were well armed and each other not long diasaleftei order and anarchy prevail.

The result was that the resort is plagued for years by violence and looting, mainly of Liapis, who remained in Skiathos and even when most refugees came back to their homelands or settled in other more suitable places. In 1823 the Turks attempted to retake but decimated. In 1829 after the signing of the Protocol of London which institutions Greek state, but tributary to the Turks, the islanders left the castle and settled again in the harbor, where it was the ancient city of Skiathos.